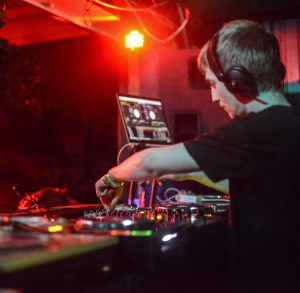 WheresNorth? is one of the Norths most reputable underground rave DJs, known for fusing the current best in bass sounds with classic slamming breakbeats, along with his high calibre mixing style create an serious recipe for the rave..With an armful of high profile gigs and huge festival slots under his belt supporting world wide superstars such as Phil & Paul Hartnoll (Orbital), SHY FX, Hannah Wants, Paul Woolford, Andrew Weatherall, Stanton Warriors, Leftfield, Wilkinson, Eats Everything, Hot Since 82, Jackmaster, Denis Sulta, Special Request, DJ Q, Flava D, General Levy… on top of many many more Phil has firmly cemented himself in the northern underground music scene and continues to push the sound he and so many others love! Also hailed as Head Honcho of DuskTilDawn Sheffield .. one of the well known underground warehouse events in the North known for their huge collabs with the likes of Hot Cakes, Punks Music and Boom Sounds ‘The Asbo Disco’.

Recently having made the break-through to a Live Act, Where’sNorth [LIVE] is a 6 piece band amounting of a Sax, Guitar + Synth Unit, Drums, Percussionist and Sampling, Guest Vocalists and of course Where’sNorth himself on the 1’s & 2’s! Blasting a huge Breaks/Tech Funk/Techno sound with cutting edge fusion of influences, The Live show is something that everyone needs to see! All gigs are booked on reputation and recommendation.