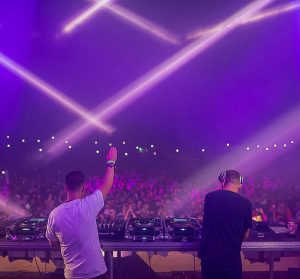 Utah Saints are a British dance band from Leeds in West Yorkshire. The music is produced by Jez Willis and Tim Garbutt – Solfest 2019 had Utah Headline the Saturday night main stage set and became the feel good hit of the weekend! (The press shot was taken at Solfest 2019!)

With the year everyone had we had to ask them to return and headline the dance tent!

Utah Saints were one of the early pioneers of bringing sampling technology into mainstream dance and pop music, and have also gained a certain notoriety for the long gap between releases – their follow-up, Two, came seven years after their debut.

They were described as the first true stadium house band (by Bill Drummond), though their music is difficult to place into one particular genre and they have been compared to Underworld, Fluke, The KLF, and even Ministry or Nine Inch Nails.

They first had chart success with the singles What Can You Do For Me, Something Good and Believe In Me, which they described as their vocal sample trilogy as those singles sampled Gwen Guthrie, Kate Bush and Human League respectively (What Can You Do For Me also features a sample from Eurythmics). Contrary to one rumour, the band were not sued by Kate Bush over the use of a sample from Bush’s track Cloudbusting in the Utah Saints track Something Good, the sample was legally cleared before use. Utah Saints then moved away from vocal samples with singles such as I Want You and I Still Think Of You (Jez Willis providing original vocals on each).

After their first album, the self-titled Utah Saints, and one further single Ohio, Utah Saints seemed to disappear for several years, spending a long time producing their second album as well as doing remixes and producing tracks for other artists such as Terrorvision. During this time they produced a handful of Utah Saints tracks that to date have never had a proper release, with titles such as Star, Train and Rock.

They eventually re-appeared in late 1999 with charting singles Love Song, Funky Music (featuring Edwin Starr on guest vocals), Power To The Beats and Lost Vagueness. In 2002 they went back into hibernation and fans are still waiting for their next re-appearance.