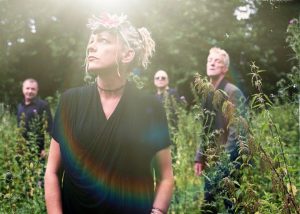 With 12 UK chart singles, plus four number 1’s and two number 2’s in the US dance chart Sunscreem stood alongside The Prodigy and The Shamen in pioneering commercial electronic music.

Back in 1992 they signed a major record deal after only 6 shows and the accolades started pouring in: MixMag Award for Best Newcomer, NME Favourite College Band, even Best Scottish Dance Act (not bad for a band from Essex!).

The single ‘Love U More’ hit number one in all three UK Dance Charts soon afterwards, a success that was repeated in the US Billboard dance chart. Then, “Perfect Motion” with its infectious hook sealed their place in dance music history by hitting the UK top 20 and dance number 1 both sides of the Atlantic and their debut album O3 sold 300,000 copies.

Since then the band have released 5 albums and over 200 tracks and remixes. Their singles have consistently charted around the world and they have played over 500 shows to hundreds of thousands of people. Whilst Sunscreem may have one foot in the nostalgia market they’re still making cutting edge dance music today with, 15 thousand monthly Spotify listeners and an album release scheduled for 2022.

Their live show is energetic as ever with new additions such as singer Lucia Holm playing electric cello on one track, a 4 minute percussion solo on Perfect Motion and a techno cover of Led Zeppelin’s ‘Kashmir’. Old fans and newcomers of electronic music will adore this show.