Sam and the Womp 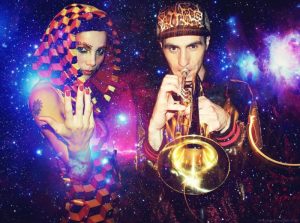 Sam and the Womp is a British band headed up by trumpet player and premiere rabble-rouser Sam Ritchie and Dutch-born singer-songwriter Bloom de Wilde. Sam and the Womp’s debut single was ‘Bom Bom’, and it went straight up to No. 1 in the UK charts in August 2012. ‘Bom Bom’ went on to sell over one million copies around the world. The band’s trademark sound comes from an innovative mix of ska and Balkan music, blended with modern dance and electronic sounds. From 2009, the year they formed, up until February 2014 the band also counted Aaron ‘Audio’ Horn among their ranks. Horn is the son of legendary producer Trevor Horn. When Aaron left the group, Sam Ritchie and Bloom de Wilde carried on as a duo, and they are still going strong today, bringing ‘Bom Bom’ and other hits to loyal fans around the globe.