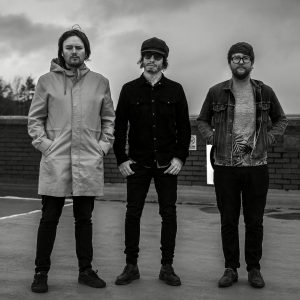 Combining a head-on collision of fuzzed-out euphoric shimmering grunge and 80’s angular post-punk gloom, Whitehaven 3 piece Reptilians have been slowly creating a sound that’s unrelentingly powerful, accessible and unique since their inception in 2018.

Throughout 2019, the band has impressed gig-goers throughout the county with a series of energetic headline performances and festival appearances, supporting the likes of Pete Doherty & Carl Barat, and appearing at Kendal Calling, Solfest and Rivedell Festival.

On ‘The Modern Harrison Bergeron’, Reptilians address toxic masculinity, equality and sense of purpose over a brooding and cataclysmic post-punk racket that echoes The Smiths, Interpol, The Mars Volta, Savages and IDLES, while touching on literary influences from Kurt Vonnegut to JD Salinger. It’s two minutes and thirty seconds of raw, dark and pure intensity which culminates in a swerving, careening tremolo soundscape that could easily soundtrack the full collapse of everything around us.