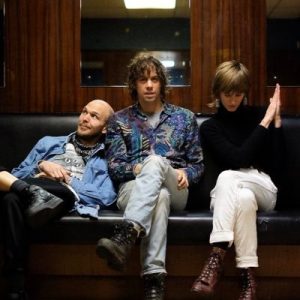 The summer of 2002 was a strange time in East London. A time before social media, before so many of the grassroots venues had been shut down. Suddenly, rock ‘n’ roll exploded out of its late-90s, post-Brit Pop doldrums. Everywhere, kids were forming bands.

Most of the groups that burst out of this chaotic, creative melee flamed briefly then faded away. Razorlight were different.

Formed around singer/guitarist Johnny Borrell, their debut album, ‘Up All Night’ perfectly captured the incendiary energy of the squat parties and sweatbox venues of that original East London scene. It also carried a couple of breakthrough, era defining hits, including ‘Golden Touch’ and ‘Somewhere Else’.

With their self-titled follow-up, Razorlight truly made the leap onto the international stage. Lead single, ‘In The Morning’, reached number three in the UK, and ‘America’ went straight to number one. The band headlined festivals and toured the world – Johnny appeared on the cover of Vogue and enjoyed a playfully fractious relationship with the national press. A third album, ‘Slipway Fires, provided top-ten singles across the UK and Europe.

But, across the music scene, the original fire of that 2000s guitar explosion eventually burned itself out. In a riotous 2016 interview with Vice, Borrell himself dissected Razorlight’s contradictory part in that story. Cutting edge music abandoned guitars in favor of grime and dance. Borrell himself formed a solo project –Zazou – exploring esoteric elements of blues, world music and psychedelic jazz.

This has all left a gaping space at the top of British music for ambitious, fun, inspiring rock music. It is this space that Razorlight came storming back in 2018 to fill with their explosively exuberant new album, Olympus Sleeping. As Johnny described it, ‘I made this record in a spirit of nothing but enjoyment. This album is my very pure love letter to a certain type of music – the music that first inspired so many people to form and follow bands.’

And the band promptly delivered. “Got To Let The Good Times…” fizzes, pounds and bursts the album into life – leading straight into the slick grooves and jangling hooks of “Carry Yourself” and “Brighton Pier”. Before we’re nine minutes in, we’re reminded exactly of what always set Razorlight apart – that unique ear for a smashing pop melody, and the energetic focus in performance that almost no one else since has matched.

The other element that consistently set Razorlight apart was simply that they always played with groove. Razorlight’s engine was always that twitchy, energetic Police-influenced backbeat. For Olympus Sleeping, Johnny worked closely with guitarist, David Ellis, and the band were joined on drums by Martin Chambers of The Pretenders. Johnny succinctly sums up how this collaboration came about: “I ran into Martin and just thought, gosh we’ve been ripping off his playing for so many years, why not just actually ask the man himself!’

The effects of having that legendary talent behind the kit were immediately blindingly apparent. This album sizzles with groove – its heart beating with an irresistible, live-action, rock ‘n’ roll energy.  “Carry Yourself” took up residency on UK radio in the second half of 2018 and propelled the band to a sold out UK tour in December, complete with euphoric scenes and standing ovations at the London Forum show.

Those scenes continued across the summer of 2019 where the band supported Noel Gallagher on outdoor shows and played in excess of 20 festivals in the UK and Europe, drawing huge crowds and lifting people onto  shoulders from Portsmouth Victorious to Evreux in France.

The Killers and Foo Fighters are still going strong in America. Arctic Monkeys seem to have ditched Sheffield for LA. Meanwhile Razorlight command over a million monthly listeners on Spotify. Their late summer 2019 single ‘Cops and Robbers’  (complete with playful New York chase scene video) took them on  an early Roxy Music diversion. There’s a female keyboard player in the band, Reni Lane,  and at the end of 2019 original guitarist Bjorn Agren re-joined to replace Ellis and transform their December UK tour into a glorious re-union.

The legendary Bjorn is once again working closely with Johnny on new material and if the rapturous reception given to their January arena tour slots as special guests with Kaiser Chiefs is anything to go by, Razorlight are very much re-born.