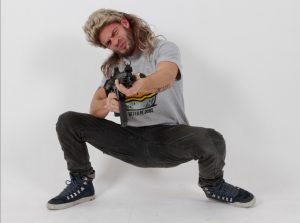 Jinx in Dub has carved a niche within sound system culture by producing a strain of Reggae influenced Bass music that’s found it’s way into the DJ sets of the world’s top selectors from Dub Pistol’s Barry Ashcroft to Congo Natty’s Rebel MC.

Aside from the obvious masters of Dub and Reggae his inspiration comes through his early love of Breaks, through Disco and Boogie music, plus his close relationship with the nations Junglists cannot be ignored.

Invitations to perform his DJ sets come regularly from the UK’s concentrated Bass havens such as Bristol and Leeds and he is supported across festival land through Glastonbury, Boomtown Fair and Edinburgh’s Wee Dub Festival. He performs alongside a variety of world class vocalists with favourites being Parly B, Gigante and Dub Dadda from Zion Train.

Jinx in Dub’s own label is called Butter Pie Dubs – representing the true Northerner within – and through this he has been experimenting with some interesting projects ranging through the conscious, heavy hitters to some more party friendly covers that everyone will know and love. For remix duties you can find Jinx in Dub on Big Dada Records, Sunday Best, Boom Sound Recordings and Jungle Cakes, amongst others.