Holy Moly and the Crackers 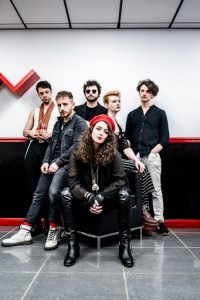 Holy Moly & The Crackers make riotous party music for the masses; a passionate take on folk, blues and indie rock“with a massive slab of rock and soul, Holy Moly fire on all cylinders, and perform with an uninhibited joy”. Louder Than War

The past two years have been game changers for Holy Moly & The Crackers. The ever-evolving folk-alt-rock group, led by vocalist Ruth Patterson, from Newcastle Upon Tyne released their new album ‘Salem’ in July 2017 on their own Pink Lane Records label. The album received acclaimed reviews from R2 Magazine, Folk Radio UK, The Crack, Clash, No Depression, Blown Speaker and has been championed by BBC Introducing and RadioX.

Following the album release, HMATC have toured the UK twice, selling out venues across the country, and made successful debuts in The Netherlands, France, Germany and Italy as well as continuing their success on the festival circuit. They’ve pulled off an accoladed appearance at Glastonbury, appeared at Boomtown Fair, Bestival + Camp Bestival and graced the main stages at festivals such as Beautiful Days, Bearded Theory, Moonbeams and Colours of Ostrava in the Czech Republic.

2021 brings Holy Moly & the Crackers back out on the world stage with an enhanced confidence and an army of growing fans. Come along for the ride – the craziest party in town always has room for one more…