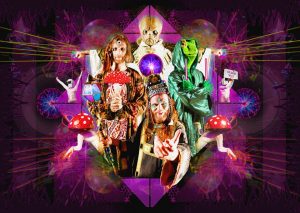 After touring much of the galaxy HENGE landed in the city of Manchester; the town in which they set up their ‘Earth Base’ 3.5 Earth years ago. These extra terrestrial beings wasted no time, rapidly establishing themselves as the band-you-must-not-miss at festivals and gathering a cult-like tribe of followers (known as ‘ravelings’).

Their fun live show and positive message for mankind is set to music that is simultaneously anarchic and wholesome. From its freaky opening to its euphoric conclusion HENGE‘s live show takes you on a joyous and imaginative journey…blithely going where no man has gone before…

HENGE are a true crossover band fusing musical elements recognisable from electronic dance music, prog, psychedelia etc … but when genre tags inevitably fall short in describing their unique sound we are encouraged (at the band’s behest) to refer to this music as ‘cosmic dross‘.

In July 2017 they released Cosmic Dross on Love Love Records, a five track EP of electronic madness so unique and captivating that it firmly cemented their reputation with the alternative festival community.

HENGE‘s first full length album Attention Earth released on October 19th 2018, is a mind blowing piece that will change the future of earth. It has already gained many advocates in press and radio. To top off an amazing year the band were voted ‘best live act’ at the UK Independent Festival Awards, the same accolade that IDLES won in 2017.

“I absolutely love Henge, they are amazing.” -Soho Radio