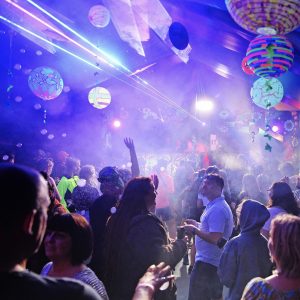 Emma Clair is a DJ, Promoter, and Producer from Manchester. Emma has quickly made a firm imprint in the contested Manchester club scene. Her very own ‘Prohibition’ parties have played a vital role of making the genre of festival favourite ‘Electro Swing’ accessible to the masses.

Her energetic, eclectic and crowd-pleasing style has led to Emma being on the same roster as some of the UK’s most revered dance acts such as Plump DJs, Krafty Kuts, Utah Saints, and even handing over to one of the God Father’s of house music – Marshall Jefferson.

A regular on the radio circuit with past shows highlighted on various UK platforms including Reelhouse TV, Pure 107.8 FM, Generate, Radio Frequency and her very own continued radio podcast ‘Prohibition’ on iTunes and Spotify.

2020 has been a big year for Emma Clair, with her own promotions gaining momentum; several high-profile online gigs for Monster Monster, Manie Dansante (Brazil) and Electro Swing Thing; the launch of her Prohibition Record Label and Swing Sisters project, resulting in an ever growing fan base. Creativity, raw enthusiasm, and unquestionable talent will push Emma Clair well into next year with undoubted success on the way.