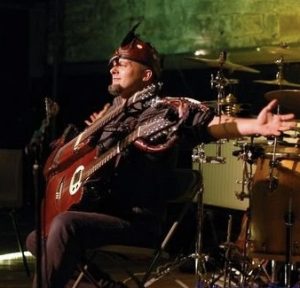 The tradition of the travelling minstrel, and the itinerant bard is alive in England.
For Ash Mandrake, the last 8 years as a self employed business man within the UK have been deeply rewarding. Ash lives in vehicles and tours constantly, taking his unusual live show the length and breadth of England. Finding pockets of humanity around the country and attracting an audience who are delighted by a show which is eclecticly diverse but also coherent; both diverse and coherent, like the life of any open minded adventurous person.

Ash Mandrake was born and brought up in Manchester. He started playing guitar at 14 and this interest continued through university, where he sang and played in rock bands. For more than a decade, he lived with the uneasy tension between a true passion for creative expression and a powerful drive to achieve academically. He studied hard; science, humanities, management. He worked globally, in industry and universities; as a computer programmer, a teacher, examiner and manager. But he also worked for a while as a stripper/kissogram, and studied fine art part time. Eventually, something had to give. And in 2005, Ash gave in to just being himself, making music, growing pumpkins and making hats. What a relief !

Ash has had no formal training in music or milinary – He is self taught.